As the Autumn footy season starts a brand new year in Australia this week memories flood back of the times our family was divided as supporters of the Sharks and Tigers NRL football teams. An even number of supporters on each team. Rachel, Ben are I are rooting for the black, white and blue as true sharkies supporters and Pete, Amy and Jacob proudly wore the Tigers stripes in orange black and white. Even the pets were mapped out into teams, giving an equal number of supporters. But now our numbers and supporters are off kilter, leaving the balance lop sided, leaving an odd number in our footy team supporters. That’s the way life feels now since Jacob has passed. We have to accept and learn to live this way as it is our new norm.
I’m sure he watched the Tigers win their first game of the season with a score of 18-34 as his dad and sister watched it in the ‘good’ room as we call it. I could hear giggles and cheers as their team delivered the points. My team had already had their limelight as they kicked off the season as the first game. Sadly they lost – 18-26. That’s the way it usually panned out when we went to watch a game in real life as a family. The long drive home in the car was always quiet and withdrawn for one team, the losers and statistically it was usually my team. Tigers having a bit of an edge over the Sharks on more than just one occasion. Watching the two teams play against one another at home on tv was just as traumatic. Pete would watch it perched in his favourite lay-z-boy recliner, Jacob usually stretched his long 6 foot 2 inch frame along the lounge by the window, Amy and Rach squished together on the lounge near the tropical fish tank (all the fish where technically sharks supporters just because of where they lived even though some wore the colours of the Tigers proudly – the clown fish Nemo and Marlin), Ben got himself comfy in the beanbag decked out in his favourite attire that he’d wear in all seasons – his boxer shorts, never feeling the cold. I just looked around the room and tried to fit in a spot amongst my family to watch the game. Most mothers would give up their own comforts for their family. The pleasure of seeing them all together (even when they weren’t talking to one another because of the game) the experience is priceless. I’m sure I ended up sitting at the end of the lounge that Jacob was on, with him using my lap as a footstool for his feet.
When we were at a game of the two teams we managed to get on a televised segment called the ‘footy show.’ As a try was being scored by the Tigers the cameras closed in on where it was taking place and they did a slow motion pan of the try for play back. In that slow motion shot you could see us our family of 6 sitting on the seats behind all colour coordinated for our teams waving flags. Pete, Amy and Jacobs faces wore smiles from ear to ear. Rachel, Ben and mine were the opposite as we knew that our team was losing. We found out that our family was on the footage as we watched an episode of ‘the footy show.’ We have the episode now to keep on DVD to treasure the memory. Jacob used to take his friend Kyle along for a day of family fun and we always gave him a footy jersey to wear in which ever team he chose on that particular day (usually the opposite of Jacob so they could have a bit of rival banter between tries). 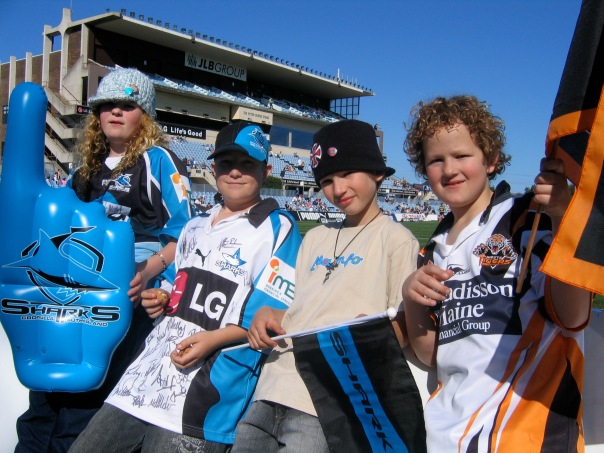 Amy has her own memories of taking Jacob to many live games and those stories will be locked away in her heart for all enternity. Trips of getting lost on the way before the days of gps on your phone and getting soaked in a mad downpour without a raincoat. The very last time she took her baby brother to a game she had to leave the stadium to get money out of a Flexi teller as the grounds only sold food by cash as Jacob was starving and we couldn’t let him lose anymore weight, the horrible parasitic disease and toxic treatment had already depleted his once chunky athletic frame of 96kgs down to around 50kgs. The weather that afternoon froze him to the core as their team lost another game of what seemed to be a shocker year, they were going out in sympathy with Jacob as he came closer the end of his life.
Watching a game of footy of our favourite teams doesn’t feel the same as it once did before. I’m forever grateful for the sharkies winning their first ever grand final last year in the month of Jacob’s first angelversary of not being with us on earth anymore. I’d like to think that Jacob had his hand in making his mum’s team win. We watched the game outside under the pergola on Pete’s milestone birthday, his 60th. Pete’s friend ‘Uncle’ Trev and his son Daniel joined us in the afternoon fun on the long weekend in October to celebrate both of their birthdays as they are a day apart. The last few minutes of the game was gut wrenching and nail biting to watch as they ball was passed from team player to another. A large moth had given us a sign earlier on that evening as the game was unfolding. It flew blindly, heavily landing on me then Pete, then me then Pete again before landing on a cartoon character poster of sharkies claiming victory. Thanks Jacob for the sign. Ben was lucky enough to have bought a ticket to travel to Sydney to watch the game unfold live at the stadium. Jacob knew they would win for his mum. Pete’s team had their glory in 2005 and we were there at the live game while the kids at home had their own grand final pool party with friends. 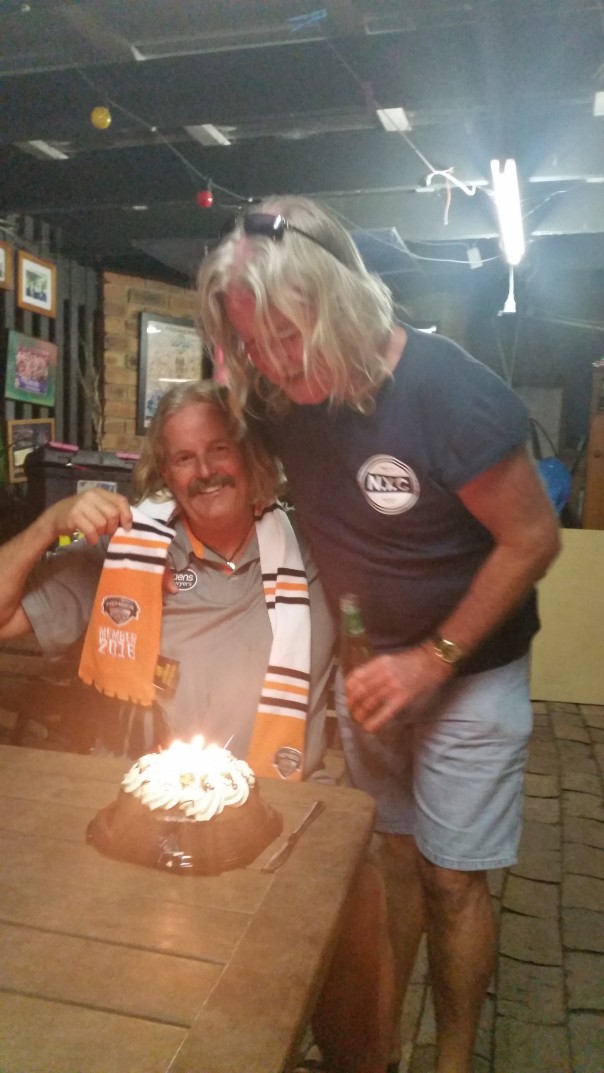 My mum and dad religiously run a footy tipping syndicate for family and friends to bet who wins in all the games for $10 per person. The winner of the comp can’t retire for the money you could be at a chance to receive would only reach $50 – $60 depending on how many join the tipping. I have used my tipping skills to claim last place where you get $5. A win for coming in at last place. In our first year without Jacob he took part in the tipping comp among family and friends. We gave him all of the ‘home’ games of the teams. He’s participating again this year too. I will pay his $5 to play. I will always be a dedicated Sharkies fan as the team hailed from Cronulla, the first place our family lived in after we immigrated from the UK to Australia.
As we watch future footy games this year we will leave an empty space. A space for Jacob. We will look out for the signs that you are with us as we barrack for our teams. I can almost hear him now….’Go the tiger-sharks.’