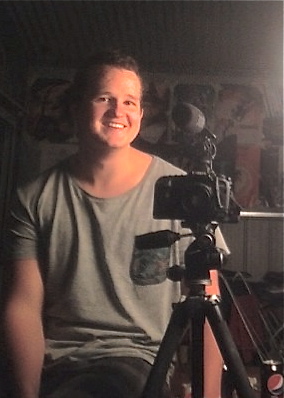 As I was looking at the pictures I took on my phone of the Easter celebration at Jamberoo I realised we hadn’t used Jacob’s camera. I instantly felt like I’d let him down for not letting his camera capture all the family love that generates at such gatherings. I made a promise (to myself) that I would continue to capture the world through his eyes (the lens of his camera) and I had missed an opportunity. I was more preoccupied about having his life size cut out being there larger than life for photos and company that I forgot his camera.

He was so proud of his camera that he bought off the very person who helped him to get his foot in the door of his chosen career on the path of becoming a camera assistant or more importantly a cinematographer – Glenn Hanns. The talented man who put together the very moving video of bullying they use as an educational tool -Anti-Bullying Learning and Teaching Resource (ALTER) Catholic Education Office, Wollongong. Jacob (with his afro hair) and several of his friends featured in it.

With this very camera he worked his magical talent with his cousin Luke, his brother Ben and good mates Dylan, Jack, Miles and Naomi, coming up with lots of funny skits that can be viewed on the Youtube channels called: CobbyFilms and JDScreeens. He was definitely going to go places.

I still don’t know how to use his camera properly as there are too many buttons and dials to adjust and it’s quite amazing that I have even managed to take a decent picture – it is then that I believe Jacob has helped me with his spiritual presence to see the world through his eyes and capture what he would see.

We’ve captured many moments of our lives as we learn to live without our ‘Jakey boy’ like Christmas, our family getaway at Currarong (a place Jacob loved) and his 21st birthday party. I just wonder what candid moments his camera would have captured at Easter as I feel that he will see and feel all our love through the eyes of the lens – capturing “Life.” But I have to let that go and move on as he would want me to and continue to use it in many more special times to come – birthdays, anniversaries, weddings, the births of babies, Christmases and other Easters to come.

I will learn how to use Jacob’s camera to it’s full potential. I hope you are still capturing the chaos and creativity in Heaven behind the lens of your camera…..like we are here – forever connected. Just like the saying – ‘Life is like a camera, focus on what is important, capture the good times, develop from the negative, and if things don’t work out take another shot.’ And after all – ‘the camera is an instrument that teaches people how to see without a camera’ – and by using jacob’s camera he is helping me to ‘see.’