I have already shared my words on my spiritual beliefs in another blog entry so I won’t rehash what has been already said before. But I do know that it is difficult for me to go to mass nowadays because I get too emotional when I hear the music and hymns being played. I recently went on a beautiful weekend retreat with friends to reconnect with my beliefs and spirituality and had the opportunity to go and speak to a nun for about an hour. I had felt guilty about not wanting to reconnect with my faith having grown up as a catholic all my life with what had happened to our family. How could losing Jacob become part of Gods plan? But having the conversation with the nun has helped. All the heARTworks and writings I’m creating for Jacob is prayer in itself – I was already reconnecting, just in a different way. I took a photo while I was on a walk with friends on the weekend and when I looked back at the photos taken later that day I was in total amazement in what I had captured in the photo. Divine intervention? One could not say, I’ll let you decide for yourself. At first I found the rainbow (no rain – it was sunny) and then there was an image in the trees (first I saw a heart, then I saw a man’s face with a beard). 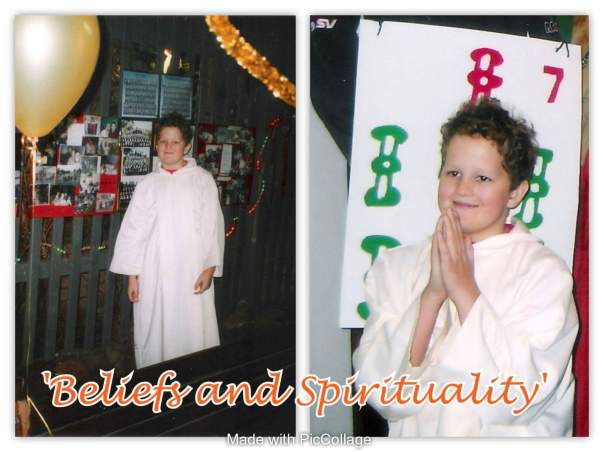 ‘Religion is belief in someone else’s experience. Spirituality is having your own experience…’
I would like to share a beautiful song my daughter Amy introduced me to when she was in her impressionable youth. A song that was sung by a youngster himself – Billy Gilman’s version of God’s Alive and Well. The words dabble with a little bit of my own beliefs and spirituality. I hope you enjoy it too.