‘Writing letters is the purest form of friendship we humans can possibly express. We capture ourselves in a moment and then we give that moment away to someone else.’ As I look in my cupboard I can see an old school case from my youth. It was a sturdy black suit case that served me well sitting on it waiting for the school bus. It was well decorated with stickers that I’d collected over the years. It is in this old school case where I keep all sorts of letters dating back to when I was 18, letters between my family and I when I was holidaying in the UK for a year. Mum religiously wrote an airmail letter at least once a week, sometimes twice. There was no Facebook, FaceTime, Skype in those days. I looked forward to getting my written weekly fix of news from ‘home.’
In this school case I have kept lots of love letters from Pete and I that we wrote to each other just as I’d started my nursing profession. I even have the heartbreaking letter that I wrote to him that broke his heart, the ‘dear John’ letter that a girl may write to break the relationship. I was a coward as I couldn’t do it face-to-face. If only for a brief few months we broke up only to get back together after some good feedback from my mum saying ‘Pete was really nice.’ I only broke it off as the girls I was training with were all single and I didn’t want to be left out on the weekends. Thanks mum for your wise words as we celebrate our 29th anniversary next month.
I have kept stories that I’d written from when I was around 15, fictional stories about my future family with names of children I’d like to have, adventures that I’d be going on, living ‘happily ever after.’ I’d keep poetry in the school case too. You’ll find letters and cards my children had written and made for me for Mother’s Day, Christmas and Easter practicing their newly formed hand writing as they began to make their mark in the world. Distinct hand writing that I will always be able to recognise as to who wrote that message on the card even without writing their name, just a happy birthday message was enough to recognise, just as an individual fingerprint shows a unique identity.
I have kept some of Amy and Rachel’s old letters they had written to Pete & I on their weekend retreats with Antioch writing about all the reasons they love us both, faults and all. Ben always had a story to accompany his drawings he would do for me, drawing and writing about our football team ‘the Sharks.’ Jacob would write his letters back to front and give himself a total new name, ending with a ‘d’ instead of a ‘b.’ Must be a boy thing as my brother used to write some of his letters back to front too. We found a message he’d written inside a cupboard when he was really young – ‘I hat my mum, don by bebbie’ obviously written after getting into trouble, blaming his sibling.
We would all love to receive letters from our loved ones after they’ve left the world’s atmosphere just like in the romantic movie ‘ps – I love you.’ Who wouldn’t want a letter from their loved one to inspire you to redirect your life from grief and loss and on to a new adventure as we move forward in our lives without them. But things like that are just good movie story lines and don’t happen in everyday lives very often. If they do happen, you are extremely lucky. I will tell you a story about how an old letter was found by mistake. A letter that has become an irreplaceable piece of hand written words in blue pen.
A teacher from the high school where all my children attended found a letter that Jacob had written to his future self. This teacher was Jacob’s year co-ordinator and held a soft spot for Jacob. I will share with you her letter to us following the loss of our ‘beautiful brown eyed boy.’

Dear Peter, Debbie, Ben, Rachel and Amy,
I am so sorry for your loss of your beautiful son and brother Jacob. I attended the Memorial at Windang Bowling Club and was moved by the ceremony and the number of his year group in attendance. I’m sorry I didn’t say much to except Rachel as I left quite emotional after the formalities.
I have fond memories of Jacob and I’m so pleased that when he asked me could he attend his classmates Formal I said yes! There were even more photos of this happy occasion during the memorial (that’s probably why I was so upset).
Incredibly, the other day I found something that Jacob had written and I wanted you to have it. We have moved to a common staff room and for years since Jacob has left school I have kept the letter he wrote to himself at the Year 11 Retreat. I guess I had always meant to return it to him but it had been forgotten and sat in a tub above my filing cabinet until our move. When we moved I was extremely busy and never had the opportunity to really unpack and get organised.
The other day I started unpacking and was blown over by this find still with Jacob’s handwriting on the front of the envelope. It’s the letter he wrote to himself at his retreat. We normally return these to the students at their formal. Even though Jacob was at the a Formal, as he was no longer a student it was not in the pile of others to return and had been separated.
I also had a favourite photo of Jacob that I took in my classroom during a Geography lesson. I have copied that for you to have also.
I am sending you these not with the intention to upset you in any way bug so you have an insight into Jacob’s inner feelings at this time in his life. I’m sure he would have followed his dreams and achieved well in his chosen field but it was not to be unfortunately.
I hope these items are a comfort to you at this difficult time.
Thinking of you all, with love… 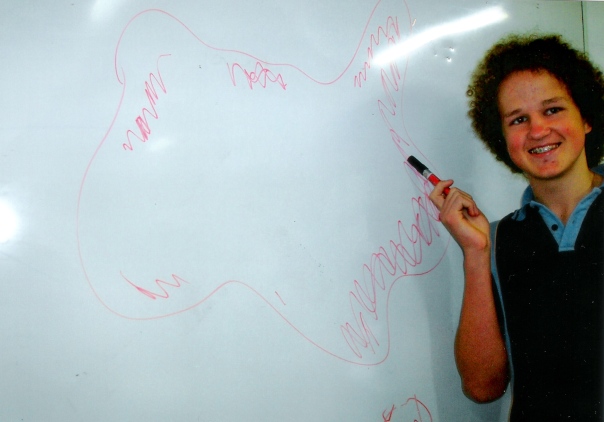 The teachers letter brought tears of sadness and joy all mixed together as we read his letter to his future self, written 3 years prior to his passing on the 25th Oct 2012. He was 17 at the time. The teacher wrote her letter to us with Jacob’s letter and photo inside dated the 27th Oct 2015. Just 2days shy of being spot on to the date that Jacob wrote the letter.
Hello future self,

If you/I am reading this I actually went through to year 12 which means you didn’t leave to do a tafe course in cinematography. Which means you have made a kick ass movies for Drama and Multi. You should be ripped by now. You should have a part-time possibly full time after HSC, job that is. You should have had or still had a girlfriend if more congratulations, if not keep trying or listen to Mr Lemmon and wait your call. What else to write…
Keep trying to be a cinematographer do not give up and don’t listen to anyone else.
You should still be friends with Chris much closer to J Cordina’s group. If I missed out on anything Improvise. “Life is an occasion rise to” “Don’t stop believing” Ok well stay alive. Stay sexy, smart and strong.
I will always love you/me

Don’t change!!
P.S if I did do a tafe course disregard this letter.

We have framed Jacob’s letter and put in on the wall near his memorial shelf in the family room.

There is a song that comes to mind as I write about letters. It’s a song by Elvis himself – ‘return to sender.’ Jacob did a pretty good impersonation of Elvis in the bath during his chemo treatment as you see his Hickman’s line in his chest where the chemo entered his body. Although it’s not the same song, he did it well and I’m proud that our local theatre once called him ‘little Elvis.’ His wonderful sense of humour came out in his letter and in the bath and his sense of self is very strong and I will always love that about him.  I’m proud he is mine and he called me ‘mum.’

The hardest words to read in his letter was ‘stay alive.’ He will always be ‘alive’ in me x